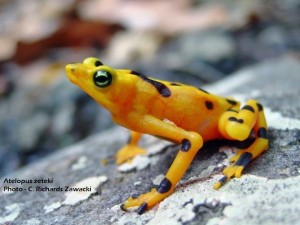 These brilliantly-colored harlequin toads are striking exhibit specimens, serving as a flagship species for global amphibian declines due to the impact on Panamanian golden frog (PGF) populations from amphibian chytridiomycosis (Batrachochytrium dendrobatidis; Bd). PGFs live within tropical montane cloud forests, with breeding and larval development taking place in forest streams. True Panamanian golden frog, Atelopus zeteki, was recognized as a distinct species from the very similar-looking golden harlequin frog, Atelopus varius, based on a unique skin toxin, zetekitoxin, and bioacoustical differences. In addition to vocalizing, PGFs communicate by semaphoring, a limb-waving phenomenon that is hypothesized to have arisen so that the frogs could locate mates for breeding near the deafening sounds of waterfalls, where their gentle vocalizations are inaudible.

A. zeteki, and A. varius, are both listed as Critically Endangered (CR) by IUCN, CITES Appendix I, and FWS Endangered since the mid-1970s. Unfortunately, A. zeteki has not been observed since 2009 and is most likely Extinct in the Wild (EW), while A. varius still persists in small isolated populations.  The captive population collected in advance of the Bd front in the early 2000’s and brought to AZA institutions were intended to serve as assurance colonies and flagship exhibit species, and continue to do so today. Now with the construction of facilities within Panama to serve as in-country breeding centers for potential release and a PHVA meeting held in late 2013, there are plans to repatriate some diverse SSP bloodlines of PGFs back to Panama to serve as founder stock. Research on disease impacts and mitigation, suitable habitat, and general health of PGFs were also identified as key needs during the PHVA. Continuing to change perceptions and raise awareness of the culturally significant, yet highly coveted PGFs within Panama to ensure their survival post-release will also be necessary. 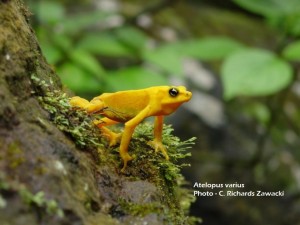