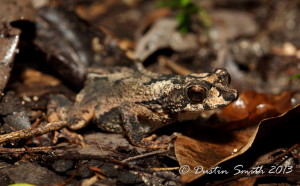 The Critically Endangered Puerto Rican Crested Toad (PRCT) has been the focal species of one of the most significant AZA conservation programs.  It is the only native toad to the island of Puerto Rico and has gone through population declines because of the introduction of the marine toad (Rhinella marina), habitat loss, and habitat degradation. Since it was first described, the PRCT has been very difficult to observe in the wild, with less than 30 sightings from its description in 1868 to the 1930s.  It was then thought to be extinct until the 1960s when a population was rediscovered in the northern portion of the island.  A little over a decade later, a large population was found in the southern portion of the island, which is now the only living, natural population.  In the 1990s, the northern populations of PRCTs had completely disappeared. 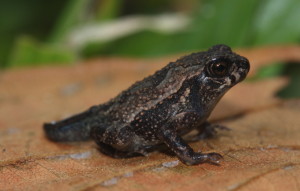 The PRCT SSP is focusing its efforts on maintaining a genetically diverse assurance colony, continuing to expand the reintroduction and sites available for reintroductions in the wild, and increase capacity within AZA facilities.  There are currently 30 facilities housing crested toads, but less than half are participating in the breeding/reintroduction program.  To expand the productivity of the program, facilities are needed to create space to house a breeding population of the PRCTs and maintain a portion of their offspring.  Once offspring have been released, post-release monitoring is conducted to determine efficacy of the program.  An MOU is in place with partners in Puerto Rico to ensure the success of the program and the long-term survival of the species.  PRCT member facilities are encouraged to participate in the breeding and the release efforts through annual trips for in-situ capacity building and reintroductions.  As of fall 2015, there have been more than 350,000 tadpoles released in Puerto Rico, due to the efforts of the SSP program.

For more information about the Puerto Rican Crested Toad Recovery Program, visit the website below: